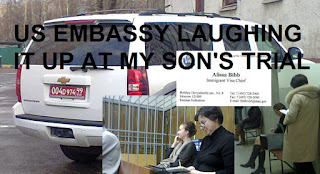 PRESS RELEASE August 11, 2016
Best of the day to you! I am writing to you because our lives are at risk and I ask your support to end the cynical and inhumane treatment of my family by elements in the Russian Government who are covertly carrying out orders from the CIA, the U.S. State Department and the U.S. Embassy in Moscow.
As the first ex U.S. Citizen with political asylum in the Russian Federation, a former Voice of Russia geo-political journalist and Russian propagandist and a long serving supporter of President Putin and the Russian State I have repeatedly asked the Federal Security Service and the Presidential Administration to protect my family and myself from backlash coming from the CIA and pro-American elements in Russia due to my extensive journalistic and other work against the U.S. attempts to bring Russia to its knees and eliminate President Vladimir Putin. Unfortunately all of my requests for protection have been ignored and all of my attempts to seek first citizenship after filing then a proper defense of the human rights of myself and my family after the U.S. began actively targeting us, have been unsuccessful.
I am sending out this plea after I was contacted by my son who is suffering horrendously in a Russian prison zone. He said he was told that he will be exchanged for Constantin Yaroshenko. This is completely and totally unacceptable and would constitute an egregious, cynical and brutal violation of his human rights and his rights under United Nations and international standards regarding the treatment of persons with asylum. I have written dozens of letters and have made dozens of please for his case to be looked at by a neutral body as I am certain his fabricaterd arrest was ordered by the U.S. Embassy in Moscow and carried out under instructions from the CIA due to my anti-U.S. journalistic work. My son were he to be returned to the United States would face torture and I am certain death.
I ask you to help me to get this message to the President of the Russian Federation Vladimir Vladimirovich Putin and the heads of all human rights and judicial bodies.
The abject poverty and humiliation and the destruction of my family including the continued detention of my son and the possibility that he was set up in order to facilitate a prisoner exchange for a person (Yaroshenko) whom I myself vociferously defended in my journalistic work for the Voice of Russia, shows the active participation of corrupt Russian officials working against the interests of the Russian Federation and the advancement of U.S. interests in Russia. I also ask you to help me get this message to Alexander Vasilevich Bortnikov the Director of the Federal Security Service and the Internal Affairs Division of the FSB.
Thank you.
John Robles
+7-978-228-1455
jar2@list.ru
Posted by J at 19:45